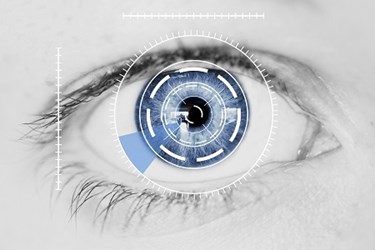 Biometrics is the emerging trend in identification and authentication, from fingerprint scanning to facial recognition. While biometrics has been on the radar for a number of years, it has gained most recognition in the financial sector as a means of preventing fraud. Now, biometrics is also making its way into the education sector in a number of ways.

Virginia Commonwealth University has become one of the latest college campuses to employ iris scans instead of traditional student ID cards for identification purposes. At VCU, two iris cameras allow meal plan holders to gain access to the dining hall. Stephen Barr, director of campus services who oversees VCU Dining Services explains, “With iris identification, it’s a simple as a camera taking a picture of their eyes and two seconds later they walk through.” The voluntary system is a sort of “express lane” to enter the dining hall quicker at peak times.

George Mason University also adopted the iris scanning technology last fall, implementing it at their dining halls. According to Mark Kraner, executive director of Campus Retail Operations at GMU, the iris scanners provide a fast, noninvasive method of identification, preventing the use of stolen or borrowed Mason IDs for the meal plan.

Mason Dining researched the success of similar programs at other east coast universities, such as University of Georgia and University of New Hampshire and found that most universities that had an Anytime Dining program abandoned the campus ID and replaced it with a noninvasive scanner. Mason chose the iris scanner over a fingerprint or a hand print methodology — the accuracy of iris ID is higher than other methods because the iris only changes detail if the shape of the eye is altered.

Iris scanning can be used for more than just access to meal plans. Iris scanners can also be used to verify student identification for access to online courses or financial transactions.